Join the South Carolina Archives & History Foundation for our Fall Speaker Series. The three-part lecture is free for members of the SCAHF and $10.00 per lecture for non-members. Pre-registration is recommended.
Registration and Socail open at 6pm.

Gibert Kennedy recounts the story of his great-great-grandfather and his family, drawing from dozens of public and privately owned letters.  This is a story of hope, sacrifice, and restoration: throughout the American Civil War and its aftermath.  The Foster family endured all of these in no small measure.

Title: Gathering up the Fragments: The Elusive Cheraw Indians

Meet Me at the Rocket: A History of the South Carolina State Fair

Who doesn’t love the bustle and jangle, the smells, the sounds, the energy, and the tastes of a lively state fair? In this fast-changing world, keeping any endeavor alive and thriving for 150 years is an accomplishment, but the South Carolina State Fair has met any challenges with doggedness, determination, and flair.

State of Rebellion: South Carolina’s Place in the American Revolution

Registration is now closed.
Registrations will be accepted at the Symposium site on October 5 beginning at 8am.

View and Download documents from the Conference HERE (Dropbox link)

Registration for the 2019 Historic Preservation Conference is now Closed.
We have reached the maximum capacity for our facility and cannot accept any additional registrations. Please check the SC Archives and History Foundation website for future events. Thank you for your support and interest in our programs. 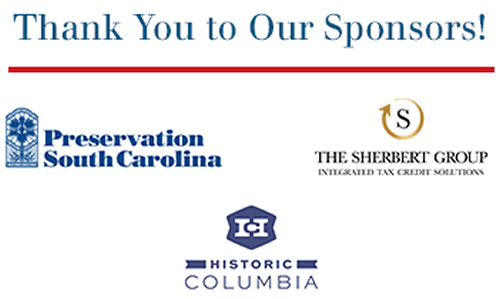 The activity that is the subject of this publication has been financed in part with federal funds from the National Park Service (NPS), U.S. Department of the Interior, and administered by the SC Department of Archives and History (SCDAH). However, the contents and opinions do not necessarily reflect the views or policies of NPS or SCDAH. This program receives federal financial assistance for identification and protection of historic properties. Under Title VI of the Civil Rights Act of 1964, Section 504 of the Rehabilitation Act of 1973, and the Age Discrimination Act of 1975, as amended, the U. S. Department of the Interior prohibits discrimination on the basis of race, color, national origin, disability, or age in its federally assisted programs. If you believe you have been discriminated against in any program, activity, or facility as described above, or if you desire further information please write to: Office of Equal Opportunity, National Park Service, 1849 C Street, N.W., Washington DC 20240.

The South Carolina Department of Archives & History (SCDAH) will host a genealogy workshop focusing on African American research at the Archives and History Center on February 16, 2019. The workshop will focus on pre and post emancipation government sources in our collection including census records, vital records, military records, state records, county records, and online sources. The session will conclude with a tour of the Research Room and records storage area. Time will also be allotted for individual research consultations.
The workshop will take place on Saturday, February 16th from 10:00 AM to 12:00 PM at the Archives and History Center located at 8301 Parklane Road in Columbia. The workshop is free and open to the public, however, space is limited and pre-registration is recommended.

We are accepting proposals for Education Sessions for the 2020 South Carolina Historic Preservation Conference to be held on Friday, April 17, 2020 at the SC Archives and History Center in Columbia.

Download this pdf for full details: Call for Proposals 2020

This year marks the 100th anniversary of the Armistice that ended World War 1.  The global war had an immense effect on Europe, both for its destruction and death, but also for its impact on future politics and events from Asia to Europe.  But for many Americans, it was a forgotten war; its consequences much more muted when compared to the Civil War or the Second World War.  In South Carolina, the impact was very direct from the millions of Federal dollars spent on building military facilities to the thousands of young men sent overseas where they were exposed to ideas and cultural norms different from their own.

Join us as we explore some of these topics and learn more about the impact this global conflict had on a small southern state. Registration fee $40, lunch included.

11:15 A.M. – 12:15 P.M. –On the Homefront: The American South and the First World War, Dr. Ryan Floyd, Associate Professor of History at Lander University

1:15 Depart for Fort Jackson Basic Combat Training Museum.  Participants must provide their own transportation to the Museum.  Directions will be provided.

The Fort Jackson Basic Combat Training Museum is located on the largest US Army training facility in the country. The fort is named in honor of President Andrew Jackson, a native of SC. The Museum’s mission is to collect, preserve, exhibit, interpret, and account for historically significant property related to the training of the individual soldier and the history of Fort Jackson from 1917 to the present.  Military equipment from past wars is displayed outside the museum.

Originally scheduled for April 17, 2020 and then postponed until September 25, 2020, the 2020 Historic Preservation … END_OF_DOCUMENT_TOKEN_TO_BE_REPLACED

Register now for the South Carolina premiere of Willie.  The movie will be held on Saturday, February 15, 2020 at the SC … END_OF_DOCUMENT_TOKEN_TO_BE_REPLACED